Jehovian Seals or J-seals were placed in the earth’s Planetary Shield about 200,000 years ago.

They were placed around the same time as the 12 Star Crystal Seals.

The Star Crystal Seals were placed in preparation for the earth’ s ascension at this time.

The Jehovian seals were placed to interfere with this process. They ride on the frequency being brought in by releasing the Star Crystal Seals and start distorting these higher frequencies.

Six of the Jehovian Seals have been activated at this time.

The 12 Star Crystal Seals are connected to the 12 Universal Stargate portals and once all of them are activated.  They will allow for the axiatonal lines in the Earth’s Grid to be activated and a Merkabah will be built for the earth.

The distortion created by the Jehovian Seals has damaged out Earth’s Planetary Shield.

This shield resides on the outer limits of our universe.

At this point in time the shield has been significantly damaged.  A new shield has been brought into place just inside of earth’s planetary shield.  But it is not activated yet.

Once all 12 portals are opened it will allow for this shield to be activated.

In the times before the fall, some 200.000 years ago.  Humans were not dying.  They would simply ascend from the density on earth and leave through the Universal Star Gate Portals.

In those days there were 12 angelic human tribes appointed to carry the original Planetary Templar complex.

These Human Angelic Tribes were the guardians of this Planetary Templar complex.

The Emerald Covenant held the original divine blue print for earth’s ascension and our ascension. It has the ability to complete all activations that are needed to ascend the earth.  And ascend the human that chooses to ascend with the earth.

For over 11,000 years humans and illuminati were denied the truth and the history of all this.

They have been destroying each other on behalf of the fallen races outside of our universe.

The Sacred teachings of the 12 tribes are hidden among all religions.

So the 12 Star Crystal Seals open us up to a higher frequency.  The Jehovian seals are distorting this frequency.

We have 7 Jehovian seals inside the human body.  We are not able to fully integrate the higher frequencies.  And what we integrate is distorted and out of balance.

The distortion of the frequencies also had its effect on the Planetary Shield.  It created holes that unbalance the energies even more.  Influencing our weather and the tectonic plates of the earth.

The Illuminati have chosen to work with the Zetas instead of the Emerald Covenant nations.  Preventing us from knowing about this and preventing us from doing repairs here from the earth itself.

The Emerald Covenant Nations have been sending in energies that can assist us.  They can assist in balancing the distortions and these energies are being anchored on earth.

The opening of the Star Gate Portals allows for more energies to be sent in at this time.

The Zetas represent several groups that are there only for the sole purpose of controlling the earth and use it for their purposes.

Six of these Jehovian Seals have been activated and are influencing every human being on earth at this time. They prevent us from completely activating our DNA and restore our original Divine Blueprint in the physicals and spiritual bodies.

They will allow for just enough activation to make you feel like you are making progress, but they will prevent full activation.

Since the opening of the Star Gates and the securing of these gates we have been able to receive more energies.  They are stabilizing the energies in our dimensions.

This allows for a different approach in removing the J-seals (Jehovian seals) at this time.

We are ahead of schedule.  The knowledge on releasing these J-seals in a different and faster way has been given to us. This knowledge is protected under the Seal of Isis, as to not have interference while removing these J-seals from humans at this time.

As you might understand.  We cannot remove the J-seals from the earth.  This will interfere with the process of releasing the Star Crystal Seals.

The Jehovian seals are energetically connected to activate when a Star Crystal Seal is released.

We can however prevent these seals from affecting us as humans in our ascension process.

The removal of the J-Seals is very delicate and requires more than just removal.

By doing this we restore the human body back to the way it was in Lemurian times.  This allows for the original 12 D divine blueprint and all of our strands of DNA to come fully into action when they are being activated.

It allows also for a higher light integration inside the physical and energy bodies which is needed for ascension.

J-seals will prevent you from completing full ascension

We have been asked by the Masters to start assisting in removing the J-seals.

Not much is known about these seals, and only a few people have written about this.

A couple of months ago I was asked by the Masters to read the book from Asheana Deane, voyagers I and II.

While I was reading it, the Masters would show me a certain part of the removal and then I would read it and get confirmation through the book.

It was everything I knew inside but never really wanted to confirm for myself.

One of the most important steps we can take at this time is the removal of the J-seals.

If J-seals are not cleared, progressive deterioration of the body results during Stellar Activation Cycles” If this is difficult for you to believe, you will be able to when you feel them being released from your body in the exact areas mentioned below.

Now is the time to remove these seals for many as we have reached a point in time where the energies can support us. The Bethlehem Gate has been opened and through the energy that is in this Gate we are able to remove these J-seals so we can progress further into the higher dimensions.

Jehovian seals or  J-seals will interfere with certain reconnections, activations, and connection with Source. The DNA was damaged through these J-seals.

This article was written a several years ago and some things have changed including the way the J-seals can be removed at this time.

By removing the J-seals we restore the human body back to the way it was in Lemurian times.

This allows for the original 12 D divine blueprint and all of our strands of DNA to come fully into action when they are being activated.

This allows also for a higher light integration inside the physical and energy bodies which is needed for planetary and/or cosmic ascension.

The J-seals will prevent you from completing full planetary and/or cosmic ascension.

I have been given the knowledge on and how to remove these J-seals at this time.

The J-seals are located as follows for most people: 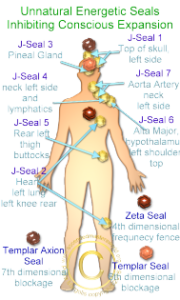 You can read more and find answers about any question on J-Seals, Jehovian seal here

Copy link
Powered by WP Socializer
Thanks for subscribing!